Skip to content
I completed and submitted my Independence Day-themed poem to Yahoo this afternoon. This particular assignment didn’t take me long to finish, but went through a few revisions before being finalized.

The biggest problem I had was deciding what the poem should be about. The poem itself was only supposed to be themed for Independence Day, but I thought a poem about fireworks and barbeques just wouldn’t cut it. Instead, I decided to focus on the reason why we celebrate Independence Day in the first place. 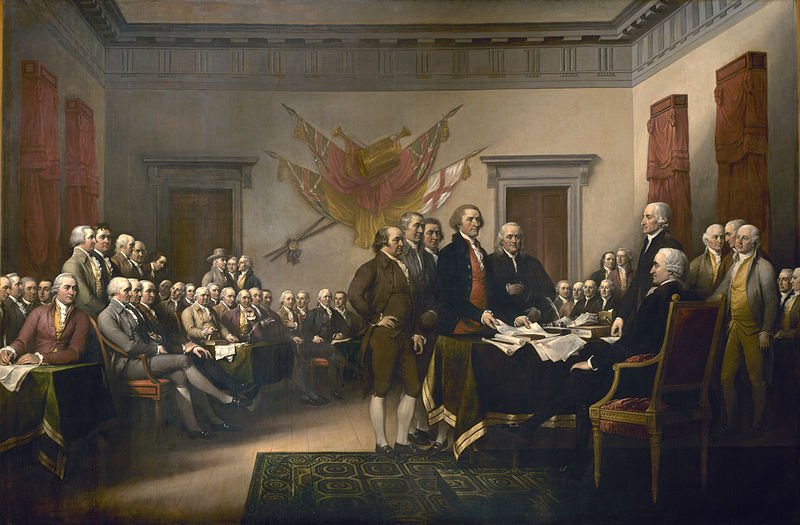 To do so, I at first focused on John Trumbull’s well known painting Declaration of Independence (above), showing the five-man committee in charge of drafting the United States Declaration of Independence in 1776 as it presents its work to the Second Continental Congress in Philadelphia. The painting made me think that maybe I should focus this particular work on that time period. After all, if it weren’t for the Founders and their struggles, there wouldn’t even be a United States of America, let alone an Independence Day.

However, I couldn’t come up with a poem that really portrayed that struggle in the light I wanted it to be. What can one really say about an event so large and history-changing?

Still, I wanted my focus to stay on the American Revolution period. It was then that I decided to focus on this second painting, depicting George Washington rallying his troops at the Battle of Princeton:

Finally, I had something I could focus on, a group of soldiers, or one soldier in particular, in which to base my poem. I focused on a fictional soldier, who awoke one 4th of July morning and thought about a fellow soldier, who was lost in the struggle for the freedom of the 13 colonies.

The American Revolution and the American Civil War are two of my favorite historical study subjects, so it made perfect sense, both in that light and in the light of the theme, that I write a poem based in one of those two periods.

I am now working on writing a short story for Yahoo with a war theme, and I believe I may stick to the American Revolution again on this one. However, I am also creating a Civil War short story outline just in case I decide to change my mind (which is always possible).

I don’t have a preview to post of either one yet due to my agreement with Yahoo, but I will be sure to post a link here in The Purple Dragon as soon as I have a link available to post. Until then, it’s back to work!