Previously published in Seeds of the Future 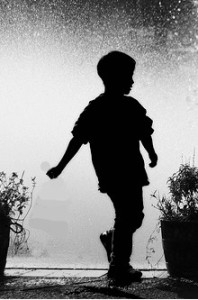 The boy shook the coin bank eagerly, trying to get that last elusive penny to fall through the tiny coin slot that had been cut in the top. Somehow the penny kept missing the slot, keeping itself just out of the eager young man’s reach. He was persistent, however and vowed that he would not leave for school until the penny was in his tiny hands.

The boy, popularly known by the locals simply as little Max, had been picking up every single discarded coin he could find during his long walks to and from school everyday. It had only been two months into the school year, and Max had already managed to save up twenty seven cents, all in pennies, something he felt very proud of.

Little Max and his mother lived in a home that appeared to be little more than a miserable rundown shack. The home was slanting, and it seemed only the dry, dead oak trees surrounding the home kept it standing upright. Were it not for those trees, the home would have likely fallen into nothing more than a pile of rotten, twisted wood years ago.

Before his father had mysteriously disappeared, Max could remember his home being a warm and inviting place to both live and visit. There was always a bright, warm fire going in the fireplace. The flames would dance like tiny orange angels for his family, as if trying to entertain them during their meals.

Now, even though a fire still burned, the warmth and the sense of happiness Max used to know have long since vanished with his father, leaving only the strong bond he shared with his mother to sustain his hope that one day, they would be able to lead a better life.

His mother had fallen ill recently, yet she pressed on even though Max could see the sickness and weariness in her face, She got Max up at precisely seven-thirty every morning for school. She would always kiss him on his forehead before he left. Lately, Max noticed her lips were cold, when they used to be warm and comforting. He thought it must be the sickness.

Max let out a happy sigh as the penny finally exited the hole in the coin bank. After throwing his fists in the air in triumph, he placed all twenty-seven cents on his dresser where his mother would be sure to see it when she did the laundry. Then he started to climb into his school clothes.

Max always left for school early to be sure he was the first kid to walk the streets. He didn’t want someone else taking the money that would have been his had he gone earlier. It seemed to work as he noticed his earnings had increased by a few cents over the past few months.

As soon as he was ready, Max exited his room, glancing one last time at the pile of change on his dresser as he did so. He smiled at the thought of helping his mother buy food. The money he got didn’t help much, but it did help some. He couldn’t wait to see how much money his early start to school would bring him.

His mother was in the kitchen waiting for him as Max emerged from the hall. The floorboards creaked loudly under his tiny worn shoes, but he barely noticed them as he embraced his mother.

“Be careful on your way to school, Max,” she said as they hugged. “And bundle up. Winter’s coming and it’s getting cold out there.”

Max nodded. He knew from experience how cold the winters sometimes got. His ten-year-old brain could very well comprehend the cold.

His mother helped him into his parka and gloves and gave him another hug. For Max, there was not a greater joy in the world than being in his mother’s warm embrace. Even the hunger in his stomach couldn’t abate the wonderful feeling he got when he was in her arms. He was sad when she opened the door and gently guided him out with shaky arms.

“I love you,” she whispered.

“I love you too mommy,” Max replied.

He turned away from his mother’s comforting gaze and started his usual walk to school, keeping his eyes on the ground for any sign of discarded change. His mother’s warm embrace never left him.

The day was not a good one for Max. He didn’t find any change that morning, and his best friend Mark was absent from school. It was Friday, and Max had hoped to see Mark before the weekend separated them until Monday. Class was boring without Mark there, so Max did all he could to make the time pass by more quickly. He mostly thought about his mother and how she was probably spending what little money they had, his change included, on food for them to eat. He couldn’t wait to get home to see what she had bought, though he knew it wouldn’t be much.

Class just dragged by, and Max found himself wondering more than once if school would ever end. He was anxious to start walking home so he could find more money, as well as anxious to get home so he could see what his mom bought to eat. His stomach ached with hunger and he wanted the aching to stop for good. He silently asked his guardian angel every chance he got for a better life, but she didn’t seem to be listening.

Finally, the bell rang to signal the end of the school day and the start of the weekend. Max sighed with relief and grabbed his backpack, again wishing Mark had been there to talk to. He exited the school, his eyes once again locked on the ground in front of him in their usual tedious twice-per-day routine.

Within a few minutes, he turned on the main street of the town. He hadn’t found any change yet, and felt sadness creeping up on him.

Main Street was practically empty save for a few cars parked in front of the salon. There was a young couple standing in front of the post office talking with loud and happy tones, Max was envious of their happiness.

When he was about halfway down the street, and directly in front of the grocery store, Max’s heart skipped a beat when he saw something on the sidewalk. He stopped and picked it up to examine it. He almost immediately deduced what the object was.

A face graced the presence of the green slip of paper, and a big “5” on every corner seemed to shout at Max, telling him that his hard, empty days were over. Telling him there was still something left to hope for.

The boy pocketed the five-dollar bill and smiled at a man standing on the sidewalk in front of the store watching him. The man’s smile was every bit as warm and inviting as Max’s mother’s was, and Max had a sudden urge to hug the man in his happiness. However, he resisted the urge and simply returned as warm a smile as he could manage. The man seemed as happy as Max was at Max’s finding of the five-dollar bill, though Max didn’t understand why.

Max started to skip home right then, holding his head high for the first time in years, and no longer caring about the change he missed. His happiness flowed through him, and he knew his mother would be happy about his find as well.

It seemed his guardian angel was watching over him after all.

Within a few seconds, Max had almost turned the corner onto Dover Lane, at the end of which sat his house. He could feel the warm eyes of the mysterious man on him every step of the way, and was sad when he felt the presence of their warmth leave him as he turned onto Dover Lane and was gone.

A lump formed in my throat as I saw that same boy walk by again that Friday morning, the one I saw walking past my grocery store at least twice a day, and each time his bony body looked like it might collapse from hunger at any moment. Every day, I watched him trying to find loose change lying in the road. It was a heartbreak for me to endure seeing Little Max and his kind mother suffer so painfully and unnecessarily.

I wanted to do something. I couldn’t just stand by and let a little boy’s every day remain hopeless and dreary. He needed hope, and I wanted to give it to him.

So I walked outside at half-past three in the afternoon, a few minutes before Little Max walked by my store on his way home. In the distance up the street, I could see the familiar silhouette of the young man, once again deep in his search for any discarded change he could find. I knew it wouldn’t be much. Few people walked the street and even fewer dropped change.

I grinned to myself and tossed a five dollar bill from my pocket onto the sidewalk. Then I stepped away to stand in front of the store, watching patiently as the boy walked slowly up the street, still knee-deep in his search.

Finally, he got closer and noticed the bill sitting on the sidewalk where I left it. He eagerly lifted it off the ground, looked at it for a long moment, and then quickly stuffed the bill into his jeans pocket.

I smiled at him as he walked past. He smiled back, and I could have sworn from the way he smiled that he knew what I had just done, even though I knew he hadn’t actually seen me do it. He started to skip down the street, seeming happier than I ever saw him before.

I watched him until he had turned the corner at the end of the street and was gone. Then I turned and entered the store, still wearing my wide smile proudly. I found that I was no longer saddened at the boy’s passing. In fact, I found that I couldn’t wait for him to pass by again next week.

“Next week,” I whispered to myself with a chuckle, “Next week, I think I’m going to give little Max a raise!”