Skip to content
There are situations in life that inspire you to do more than the norm. To push yourself beyond the boundaries you have set for yourself over years and decades of plain and simple living.

For me, today was one of those times.

Today, we said our final good-byes to my wonderful grandma Evelyn Patterson Morrow, who died on June 1, 2011 (which I also mentioned in the post for that day).

It’s always hard to lose a family member, but for me the grandparents are the hardest of all. I guess you get used to having them in the world. They’re there from your birth, and they’re notorious for always being there for you. Sometimes, you can feel closer to them than you feel with your parents. There are some days when this is very true for me. It was not an easy thing to go through in the least.

The hardest part, though, was seeing my grandfather cry for the first time. In all my 26 years, I have never seen the man cry. And even though I knew he was obviously capable of it, I just never thought I’d see the day. Now that I have, it’s something I honestly never want to see again. Seeing a man that great and idolized in pain is hard, and the pain seems to grow inside you at the very sight of it.

Still, I feel I should point out the positives of my grandmother’s death, the few there were. For one thing, I have never felt closer to my family than I do now. It was that rare occasion when togetherness is what’s really needed, and we needed that today. And we had it. In fact, it strengthened our bonds, and taught all of us that no matter what happens, we will always have family.

Her death also inspired me to work harder at what I do. I recently joined the Yahoo! Contributor Network and plan on releasing new articles for that and also for AOL, whom I also write for. Of course, I definitely plan on continuing my efforts at Suite101, but this unfortunately leaves little time for That Gaming Site. Which is rather unfortunate for a Nintendo nerd like yours truly. I’m not quitting That Gaming Site. I just won’t be writing for them much for quite some time, at least until I feel as productive as I can be for the other three companies.

This increased productivity and devotion to articles is also on the heels of my increased devotion to my novels and further developing my current projects. It’s no mystery that I plan to have a full-length novel out before mid-year 2012. But I do plan on releasing more than just one 😉

All in all, the worst day of 2011 did come with its own bright points. Grandma Morrow will always be remembered. I will end this entry now with a photo, a tribute to my grandma’s life spent with my grandpa James Mitchell Morrow in a marriage that lasted nearly 63 years. That in and of itself is inspirational. 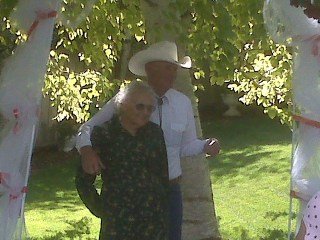