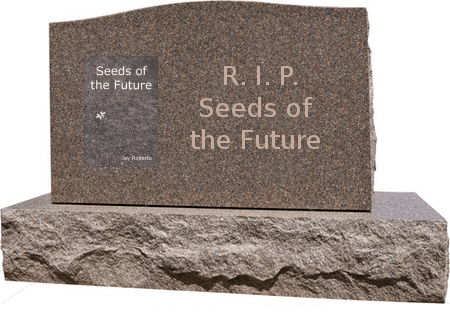 Today, I have officially discontinued my first book, print-on-demand (POD) published Seeds of the Future. Within the next month or two, the book will be removed completely from the listings on Josh Robert Nay Online.

As I mentioned in a previous entry, I am cutting all ties with POD publishers completely, even for my future poetry and short story collections (including Seeds of the Future 3) and am instead opting into more traditional publishers such as Tor.

Seeds of the Future was first published in 2006. Over the course of its 5 year life, the book has struggled, endured, struggled some more, and has even been praised despite the fact that it was released in a completely unedited and unaltered form. Seeds was a collection of poetry and short stories I wrote in early high school and college, when I was just starting to explore poetry and short story writing.

I can remember the day it was published. I was happy, though not as happy as I would have been had it been a traditional publisher. Still, I was proud of my small accomplishment, my first of many. It was a dream come true to see words I wrote printed in book form.

Admittedly, it is sad to see my very first book go the way of the dinosaur, but I have come to think of it as just another step in my journey as a writer. POD publishing has always struggled to find a wide audience, so I feel this is both best and necessary in order to ensure that the franchise grows and prospers. Besides, the book was published under my former pen name of Jay Roberts. It’s time to let that go.

In the meantime, limited copies of Seeds of the Future are available online. A few select online stores are listed on the book’s page on Josh Robert Nay Online.

Thanks to all those who currently own a copy or who are going to purchase one of the last remaining copies. I look forward to a much better and brighter future for Seeds of the Future!