Yes, Mr. Zwanzig. Duct Tape is, indeed, like the Force. It has a light side, and a dark side, and it holds the Universe together.

A brief search of the wondrous interwebs will give you an insight into the very psyche of humanity. Everything from beliefs, sad realities, and very disturbing images of grandma cuddling with her long-dead stuffed kitty can be found on search engines.

I, however, was captivated by the next element to appear on the periodic table: Duct tape.

Okay, so the periodic table prediction might be overdoing it, but let’s face it, humanity has yet to find such an amazingly profound discovery as duct tape. A brief quest on Google’s Image search made me realize just how profound duct tape really is to humanity and everyday life. 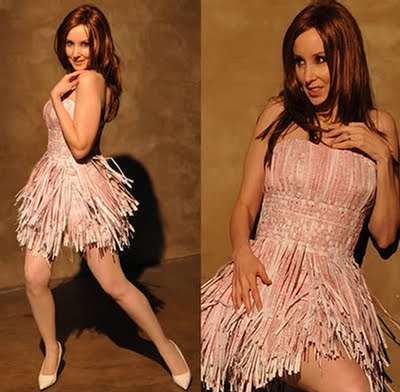 “Yes, mom, I want to wear a duct tape dress to the prom. PLEASE!! All the other girls have one!”

Of course, this poor deluded teenager will soon find out that despite her best efforts to be “cool,” studies have shown that duct tape can cause chafing. Not that I’ve tried wearing it or anything. Besides, I wasn’t aware of anyone at my prom who wore a duct tape dress. Still, one has to hand it to people for having both a large amount of ingenuity in the arts of duct, and having the free time to create such a stunning dress. I just hope she’s wearing underwear made of some type of cloth.

With this one, I did a double take. A drawstring bag? Really? I’m not one to criticize your art or your efforts at constructing something useful, but why? Are you that desperate to show all your college buddies/cliques/girlfriends/enemies that you’re poorer than they are? Or perhaps have much more free time to spare than they do because there are no buddies/cliques/girlfriends to speak of? Though I’m sure you’d get a number of enemies once people saw you wearing this while strutting merrily down Hollywood Boulevard.

A few words of advice: maybe try using some of that skill to make yourself a bouquet of duct tape roses to give to some poor, unsuspecting and unfortunate girl you might possibly date in the future. Which brings me to my next discovery…

Horribly acted romantic sentiments aside, I have to give it to this one. What a fantastic idea. I’ll have to make one for my beloved next time I run into writer’s block. After all, wasting time can sometimes go a long way in helping to alleviate the catastrophe of being unable to write. While side-stepping this monstrosity, I’ll also be doing something to contribute to the overall happiness of my relationship. Touché, duct tape aficionados.

Of the Necktie and the Nerds

Okay, if I ever saw someone walk into work wearing this thing, I’d have to snap a photo and share it on Facebook, Google+, Twitter, and I’d probably feel so inclined to share it here too. It’s sad, depressing, funny, and completely insane all at the same time. A tie. Made of duct tape.

I can see it now. The President of the United States addresses the nation. “My fellow Americans. We have done something wonderful today. We have constructed an official presidential tie out of duct tape. On a side note, we cured cancer.”

Soon, the corrupted masses will be wearing these with matching suits to staff meetings like Star Wars nerds dressed for a role (or with a “roll” [cue lame laugh]).

Oops. I spoke too soon.

But I must confess. Me being the Nintendo geek that I am, I would be remiss if I did not mention the very best…a Nintendo Entertainment System (Famicom) wallet made entirely of duct tape. Sexy.