Hey, take a quick moment and go take a look around in your bathroom. What is the manliest thing you see in there? The toilet brush? The shower gel perhaps? The laser-shooting pneumatic drill that you use to clean the goobers of sleep out of your eyes every morning? No, it’s none of those.

Not the women’s razor. That’s pink. I’m talking about the men’s razor. You can clearly tell it’s a men’s razor if it has a sleek metal handle and makes fighter jets fly around in the mirror while it’s being used (according to the commercials). Or, alternatively, you can check its name. All six of them. 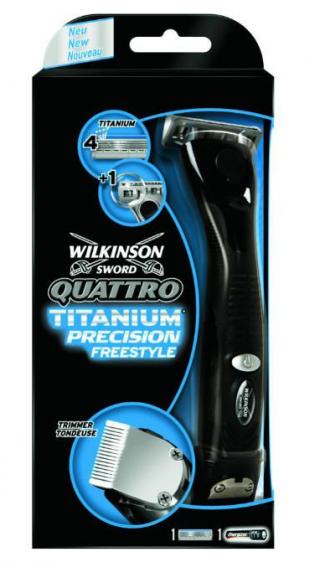 Take the Wilkinson Sword Quattro Titanium Precision Freestyle (pictured on the left) for instance. That has six names and four blades. Which definitely means it’s better than the Gillette Mach 3 Power Nitro, which has only five names and three blades. Although, confusingly, the Gillette Fusion Stealth Power has just four names, but five blades. I’m not quite sure where that one ranks…

Me, I’ve got a Gillette Fusion Pro Glide Power Razor With Microcomb – eight names, five blades … which means it beats the hell out of everything.

Obviously, all of this is beyond insane. Sure, razors are useful, are easy-grip, and generally well-made devices which have been specifically created to remove hair and often do an excellent job of it. But good god, the advertising has turned them into plastic manifestations of everything that is terrible, wrong, and stupid about the modern world.

In retrospect, the entire industry was showing signs of madness more than 25 years ago (back when I was wee). Back then, if the entire industry had been a wounded animal, it probably would have been taken out into the yard and shot through the back of the head before it could do any harm to anyone, or to itself. The current-day razor marketing fiasco shows what happens if you don’t end a bad situation when you have the chance. Nearly three decades later, it’s wandering the streets, twitching like a monkey that swallowed a banana-covered taser, smelling faintly like alcohol, and telling everyone that it’s Elvis.

This was all set in motion by Gillette’s “all 80’s” image of a man (he’s got the suit, the girl, and the jawline) and maintained through the 90’s (that’s when the fighter jets came in). But it’s this decade which has seen the madness really take hold. For razor manufacturers, the 00’s have been little more than a kine or demented arms race, which has seen more blades, more crazy functions and more ridiculous names bolted on to the common chin cutter in a lunatic attempt to out-testosterone the competition. The result, here in the transition to 2012, is a distorted depiction of cartoon manliness which has traveled so far from the land of rationality that it is now technically a moon. A moon with a shaved beard.

So, anyway, back to what I was saying about the Wilkinson Sword Quattro Titanium Precision Freestyle. Let’s break it down: “Wilkinson Sword” makes sense; that’s the brand. “Quattro” is foreign for “four” (because it has four blades). “Titanium” means it’s slightly made of titanium (especially handy for people who have mustaches that can break steel). “Precision” refers to the blade on the back for “sculpting your stubble”, which everyone’s doing nowadays because we’re all apparently complete morons. And the “Freestyle” means nothing. It’s just a word added on to the end to tell you it looks a bit different than the Wilkinson Sword Quattro Titanium Precision. You know, the “basic” one.

All of this leaves me wondering when this is going to end. Will I be popping down to Target in 2030 to buy a Wilkinson Sword Super Nanotech Double Dodecaplex Tungsten Magnum Carbide Plasma Ultra Force Freestyle?

Hell no, is the answer. Because I’ll be growing a freakin’ beard.